Every coming out story is set in a small town. Whether urban, suburban or remotely rural … When you are dealing with family, the stories we tell, the people who have known us our whole lives and who make up our world, changing how others tell the story of your life, and questions like ‘what will everyone think?’- it doesn’t matter what locality or geography surrounds that experience as much as it matters that it can feel like your whole world is shattering. Your piece of it, big or small, will never feel the same again. I just watched a film and although I will never know what it’s like to live in Oklahoma … I have lived moments of heartbreak like that film.

While the rest of the Western world was at a screening of the new Star Wars film, I was hearing parts of the film’s sound fx leak through the wall, while watching the film Carol. To round out the day, I also watched the documentary, Do I Sound Gay?

For different reasons, each film really brought out an unexpected revelation about their shared subject matter, queerness, and had me thinking deeply about a thing I feel (and have felt for most of my life) that I’ve got a pretty good grasp on.

I’ve been gay (consciously) for half my lifetime. Coming out, as I did, at 16-years-old, means I’ve had lots of time to think about it. Sometimes, honestly, I’m surprised by what I still don’t know. Or haven’t considered.

At Carol, a beautiful film set in the 1950’s, the story centers on two unlikely heroines, and their relationship; the film is spare and haunting. The sole love scene unfolds three-quarters of the way into the movie and is shot with reserve. This was interesting for several reasons. Leave aside that the movie’s leads, Cate Blanchett and Rooney Mara, do an incredible job, conveying the nuances of restraint, fascination, heartbreak and desire, and that the film is up for numerous awards. It’s one of several films out right now (including The Danish Girl, About Ray), that tell the stories of lgbt lives. Despite the trailer that makes it pretty obvious that this is a gay romance (but also a human one), a man got up, amidst grumbles, dragging his wife with him, and loudly protested, “I’m not going to watch this!?!” as soon as a woman’s clothes came off… and she didn’t take them off in order to be the receptacle for some man’s desire or hard appendage. 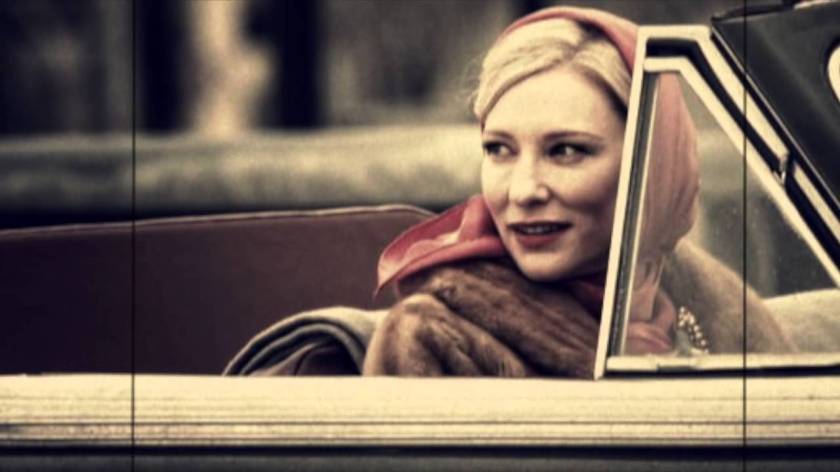 Interesting; for once (one time too many, apparently) he had to suspend HIS disbelief and imagine a story that is not designed to reflect his desires; like every queer person who watches a love scene, that does not show their own situation, and still manages to empathize, to have their heart quicken, tears brim their eyes and to feel tenderly towards imagined lives that share the human experiences of love, loss and longing. How many thousands of relationships do we witness and respond to? How many of those are like our own? A mirror to our heart and mind.

So, that happened. One couple walked out. But for many of the rest of us, we watched as something familiar to us unfolded on screen: the closing of space. The moment between two bodies that is transformational. I would wager that every gay person has traversed a great distance, mentally or emotionally, when they took the first steps to close the gap between who they have been and who they are.

For Rooney Mara, it is the slow motion walk, across a crowded room, where she walked towards the conscious decision to become something else, leaving her old life behind.

I remember that moment, and how conscious it was to cross the distance, weighing the choice to own each step, mind racing as my body moved, knowing that I was changing myself forever, in my own mind and the mind of everyone I cared about… and had never met. I looked at her, and saw the expanse of kitchen tiles stretched out between us, each one impossibly far away from the next, black and white. The kitchen of my host family, in Brazil, at sixteen. She, leaning against the counter, drinking glass after glass of water, stalling. She made me take those steps, alone, coaxing me with her voice, small talk, fully aware of the trajectory of my body and mind; later she told me she didn’t want to be ‘something that happened to me’. She wanted us to be consciously chosen. I remember it all.

The friend who saw the film with us last night joked that she ran across that space. She knew, wholeheartedly, where and to whom she was going. Some spend years circling it. Choosing to change forever – – even if you have known (forever) that you are not what you seem, or that you are…and that everything after this moment will confirm it. Some would argue that it isn’t a change at all – you are who you are. But how many of us have to make a conscious break from the script, read to you and confirmed by everything visible and invisible in your life? You choose to stop lying. To become true. You choose to diverge from the path everyone takes for granted.

The man in the theatre was so sure of that path that he didn’t think it was reasonable that he hadn’t been warned, explicitly, about the detour.

And once we get to the other side – recognizing, to ourselves, our friends, our family, our communities… who we are (sometimes in varying orders and in varying degrees), we have crossed infinite space.

Yes, we all have firsts. But how many share a communal, cultural memory of a (sometimes painful, sometimes terrifying) first step to belonging that is not part of the story we have all grown up believing we will live?

Which brings me to the next film: Do I Sound Gay? where a documentarian explores the fascination and self-loathing surrounding his voice and its gayness. He asks questions (ones I’ve heard asked so many times) about whether gayness is really a thing, vocally, and why, if it is, there are such strong feelings about it. Is it natural, nurtured? When it is involuntary, how does it impact the person who becomes part of a stereotype that is larger than themself?

Two questions stand out: why do I care if I sound gay? Why am I happy when someone can’t tell I’m gay? I honestly want to know. For queer women, I think, it’s different. We don’t have an audible stereotype. But I can identify with the strange, mystifying pride at being unidentifiable as a ‘gay person’. What does it say about me that I am happy to pass?

Partly, it means that I can self-define and exist more fluidly, bound only by the rigorous cultural expectations of my gender. Partly, I like playing with and breaking down the stereotype from the inside. We all know what the stereotypes entail, even if we feel that they are mostly ghostly, outdated ‘types’that really describe no one in particular… If I did embody the stereotype, I’d cry. There is some shame. And pride at having escaped a laughable cliche. And then there is privilege. I am aware that, in passing, I have it. It gives me the ability to move between groups, unseen, and to use my words to shape perceptions of myself… and my people. Wink wink.

In sixteen years I have never felt ashamed of who I am, not for my gayness. But I have interesting queries about what our identities and aversions mean for us, individually and as a group. It’s the perfect lead-in to a New Year to embrace some introspection. So I ask: do I sound gay?