First.. it must be noted that (in spite of what the occasional typo might suggest…) I’m an English teacher. I usually choose my words pretty carefully. And… this conversation happened in English. And, this happened at work. Speaking to an adult person.

Also… you don’t KNOW me.

And you’re not invited.

Ps. If this has never happened to you… imagine introducing yourself to someone as “Maria,” and having them correct you.

Nope, I’m pretty sure I meant what I said. And why the fuck wouldn’t I know my own name? Or who I’m sleeping with? Or married to?

Do a little better hiding your shock. If I had been speaking another language and misinterpreted or misspoke… then I could understand your confusion if I didn’t match up with your ‘lesbian’s look like X’ picture. But seriously…

Not only do we not all look the same, we don’t all try to desperately replicate straight gender roles (read: stereotypes) in our gay relationships.

Lastly, we don’t all get up to what you might think. We have diverse jobs, interests, bodies, intellects, languages, traditions… just like regular people. Woah.

I know you think it’s a compliment… but it’s not flattering that you assume all people in my ‘group’ are unattractive. And then praise me, somehow, for not being as ugly as you’d expected. Or whatever you think you’re implying. Why would you be able to tell? Sometimes you can, mostly you can’t. Plus, you don’t know our secret handshake. We’re like unsparkly vampires, with daylight rings, walking among you.

Would you walk up to a woman and say… “you’re so smart… for a woman” or to a young person and say, “wow, for a teen you hardly steal at all!” Or to a man and say, “you sure do behave like a non-violent non-neanderthal, it’s so pleasantly surprising!” No. You would never say that. We all know someone who fits a stereotype. In order for it to be TRUE, all people of that group would need to adhere to the stereotype. So, yes, sometimes we ring true to the funny, campy image… but never have I accidentally forgotten that I married a woman. 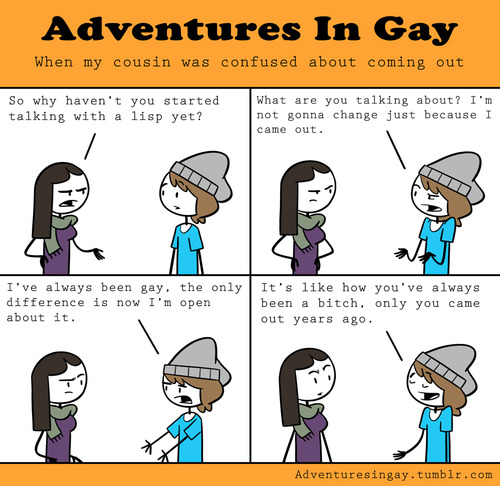